“Make Psychiatry Healthy”: Analysis of a leaflet from the Danish Psychiatric Association

The Danish Psychiatric Association has a 21-page leaflet from 2020 on its website entitled “Make Psychiatry Healthy.” Since I also think psychiatry is sick, I studied the leaflet closely. I found that the Association’s suggestions would make psychiatry sicker than it already is. Read my analysis.

I (Peter Gøtzsche) recently published an article with this title and explained why the Cochrane Collaboration’s motto “Trusted evidence” is misleading. Virtually every Cochrane review of psychiatric drugs should be distrusted because there is too little attention to all the flaws in the trials. As an example, the Cochrane 2021 network meta-analysis of depression pills in children, with the editor of the Cochrane Common Mental Disorders Group, Sarah Hetrick, as first author, is garbage in, garbage out, and so misleading that it is outright dangerous. It is similarly misleading as the 2018 notorious network meta-analysis by Cipriani et al. in Lancet, which I described as: “Rewarding the companies that cheated the most in antidepressant trials.” A commentator wrote that nothing will change unless the recommendations of previous critiques are actually implemented: To continue “flogging the Cochrane Review dead horse” won’t make it run. 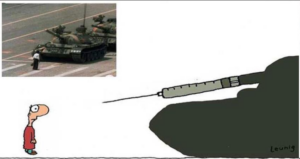 Australian cartoonist Michael Leunig was axed from his position in The Age’s prized Monday editorial page position over a cartoon about mandatory vaccination. The Age’s editor told Leunig that the cartoon was “out of touch with the readership” whereas Leunig feels it is a cartoonist’s job to challenge the status quo. Indeed. China was responsible for the massacre at the Tiananmen Square and also for the much bigger massacre on the whole world via the COVID-19 epidemic. If China had not played with fire in its gain-of-function experiments, mandatory vaccination against COVID-19 would never have been an issue. I (PCG) therefore think the cartoon is brilliant.

Fate of a whistleblower: I spoke out about abrupt med withdrawal

A too-rapid psychiatric drug withdrawal can be very dangerous and even deadly. “I documented it all, but was called for an interview and was banned from documenting my observations. I was also banned from contacting the doctor.” This brave nurse was fired. Read her story.

“Extreme laziness may have a medical basis, say a group of high profile Australian scientists, describing a new condition called motivational deficiency disorder (MoDeD). The condition is claimed to affect up to one in five Australians and is characterised by overwhelming and debilitating apathy. Neuroscientists at the University of Newcastle in Australia say that in severe cases motivational deficiency disorder can be fatal, because the condition reduces the motivation to breathe.” …

Researcher and journalist Maryanne Demasi published today an account of the Cochrane show trial against Peter Gøtzsche (me) and of subsequent events. I have uploaded the Cochrane Tapes, with an introduction and explanations. The show trial was intended to be kept secret, but the tapes from the Governing Board meeting were leaked. They show that the board violated virtually all rules for charities and for Cochrane itself and that its co-chairs lied profusely, also to the public. The board expelled one of the founders of the Cochrane Collaboration in order to protect drug industry interests, guild interests, and the dictatorial role of CEO Mark Wilson who is now history after he destroyed the Collaboration.

Disclosing disclosures would be a disclosure too far

Journalist Jeanne Lenzer asked if panellists in the American Heart Association have any financial conflicts. “Oh, no, no, no. When we put people on a panel, we insist on financial disclosure.” “Fine, would you send me those disclosures?” “We don’t disclose disclosures.” Imagine if “me too” worked that way. Oh yes, all the bastards have declared what they did but we do not disclose their names or what they did … Read the whole article by Paul Thacker here.

On 12 August 2021, Danish TV2 broadcast a brilliant documentary about WHO’s mission to China. The film is unique for understanding the scale and nature of the systematic Chinese cover up about the origin of SARS-CoV-19. I wanted to share its messages with the rest of the world and have provided a comprehensive summary, with Danish bits translated into English.